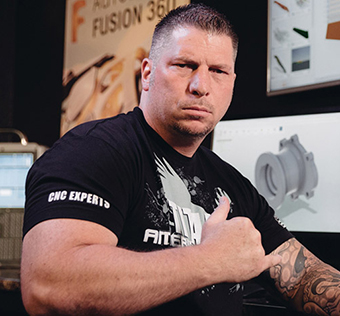 Titan Gilroy of TITANS of CNC

Titan Gilroy of TITANS of CNC will speak at the 7th Annual Manufacturers’ Summit on February 15, 2018. As keynote speaker, Gilroy will present on engaging the next generation of manufacturers.

TITANS of CNC is an elite manufacturer in Rocklin, California. Titan founded the company in 2005, and it has since become a premiere manufacturing company in Northern California because of the guaranteed quality and ingenuity of his products.

His current success started from a rocky past. After serving time in prison for fighting, Titan decided to walk away from the violence and aggression of the boxing sport, and embrace something new. He entered a machine shop as a saw operator, and sought to learn everything he could. His dedication allowed him to climb higher and higher until he became the shop supervisor.

With all the experience and knowledge he gained, Titan decided it was time to open his own CNC shop in 2005. Twelve years later, the shop specializes in manufacturing parts for medical, subsea, and aerospace. Titan’s dedication to the quality of his products as well as his passion for the arts has allowed his machine shop to excel to the top of the manufacturing industry.

Titan witnessed the devastation to the manufacturing industry during the 2008 recession, which led him to the inception of TITAN American Built, a television series featuring diverse groups of manufactures all over the country. It started airing in 2014 and is currently in its 3rd season which airs every Monday night on MAVTV. His show sought to demonstrate the necessity and impact of the industry, but it taught Titan something too—the country was in a desperate lack of skilled laborers.

His passion for the manufacturing community inspired him to create the TITANS of CNC Academy. His free online education platform features a wide variety of beginning to advanced video tutorials for CAD/CAM/CNC, prints, setup sheets, and inspection documents for those seeking to improve their skills. He frequently speaks at schools to educate students in the opportunities in manufacturing careers and to offer students the chance to learn valuable skills. “Titan has an inspirational story to tell,” said Debbie Smith, Summit Event Chair. “He is working to promote manufacturing to young people as well as the ‘Made in America’ mantra.”

His experience and success, partnered with his deep passion for the manufacturing industry, prompted MCIE to invite him as speaker for the 2018 Summit. “We have the tools we need to rise to manufacturing greatness,” said Titan when asked about his reason for attending the event. “We will engage our youth, lift up our shops, and raise our collective skill level. In 2018, we will compete together!”